The “Windows Time Rules” from SANS [1] is an excellent resource on which MACB timestamp is updated by each common operation (file creation, file copy…) on Windows, and it did not have an equivalent in the Unix world.

POSIX (Portable Operating System Interface) is a set of specifications for Unix-like OSes. It defines interfaces (system calls) and utilities behavior, including MAC updates, for consistency and compatibility across the Unix world.

In this post we decribe how timestamps updates are specified within POSIX, how they are implemented on Linux, OpenBSD and FreeBSD, provide code to find this out automatically and tables with MAC(B) updates for each OS.

The <sys/stat.h> header shall define the stat structure, which shall include at least the following members:

The fourth timestamp (called “B” for birth, or “cr” for creation) used by some file systems to store the date of file creation is not at all discussed in POSIX. There is SANS series describing implementation in EXT4 for example [3].

When a file that does not exist is created […] the last data access, last data modification, and last file status change timestamps of the file shall be updated.

Thus a new file shall get updated MAC.

POSIX specifies both interfaces (system calls) and utilities (commands such as mv). For instance for a file move such as mv source_file target_file performed locally (source_file and target_file on same filesystem):

The mv utility shall perform actions equivalent to the rename( ) function […] with the following arguments […]: the source_file operand is used as the old argument […], the destination path is used as the new argument.

So the POSIX way to move a file locally implies updating MC of the parent directory of both source_file and target_file, and possibly (depending on the implementation) update C of the moved file. What happens to the other timestamps is not described: they shall not be modified.

In addition to some freedom left to implementations in POSIX specification, the OSes tested do not attempt to be strictly POSIX-compliant.

For instance on Linux, the LSB (Linux Standard Base) requires POSIX compliance but it is not followed by a lot of distribution and very few are certified: https://en.wikipedia.org/wiki/Linux_Standard_Base#Reception

Cases of non-compliance with some MAC updates from POSIX are not bugs but achitecture and implementation choices, for instance for performance reasons.

Though not specified by POSIX, Linux on EXT4 and FreeBSD on UFS2 store the date of creation (B).

The B field exists and can be read in OpenBSD on FFS1 but it is never filled and is always 0.

Mount options exist to improve performance by restricting or disabling the update of some timestamps.

Since Linux 2.6.30 (released in 2009), the default option is relatime, this means that reading twice the same old file on the same day will update A the first time but not update it again.

The 1 day delay is hardcoded in kernel code: https://github.com/torvalds/linux/blob/master/fs/inode.c#L1614

With the noatime option, modifying a file with a simple text editor would first open it for read (A) then for write (MC), thus A will not be marked for update at the same time as M or C and will not be updated. Thus A will mostly be updated at file creation.

The resolution of timestamps of files in a file system is implementation-defined, but shall be no coarser than one-second resolution.

Both Linux on EXT4 and OpenBSD on FFS store the timestamps to the maximum resolution of the file system, the nanosecond.

Default is 2, as explained in man vfs_timestamp:

We implemented a test suite to determine, for each operation such as Move, Copy, Read, Execution, Deletion, Directory Listing… how the MACB timestamps are impacted.

Then “Local File Move” is tested across 4 implementations:

The output, if all 4 implementations give the same result, is (on Linux):

Here are the symbols used:

Here, focusing on the file’s inode (src and dst have the same inode), C is updated and the other timestamps are unchanged.

The implementation watches paths and not inodes, so it recognizes that dst’s M is the same as src’s M (>) but we know than it is really just kept the same (.).

This example shows that automatic profiling helps but the results need to be interpreted.

Besides interfaces (syscalls), only standard POSIX utilities (commands) are tested:

Dir traversal does not update any timestamp.

Symbolic links are followed (or dereferenced) to determine their target by calling readlink.

For instance on ArchLinux /bin is a symlink to /usr/bin, so executing /bin/ls will update /bin’s A (this is limited by relatime):

Note the use of a custom stat format, this is necessary as the default stat options display the link target using readlink, updating C in the process.

On Linux it is not possible to chmod a symlink (it is not implemented by the syscall), but this is possible on OpenBSD and FreeBSD.

Rename is a move when the source and destination have the same parent directory (mv file dst):

A local file move is also a simple case:

The worst of all namespace operations — renaming directory. “Perverted” doesn’t even start to describe it.

This description is based on OpenBSD’s code, FreeBSD’s implementation is alike and Linux’s behavior is similar.

For clarity we describe a move from dir/ to dst/, performed with a call to rename(dir/, dst/).

First check that source directory is not in the path of the target directory (rename(dir/, dir/dst/) would orphan everything below dir/). This mostly loops reading dst/ parent directories until it finds dir/ or /, all checked directories (from dst/.. to / or dir/, excluding / and dir/) get updated A on OpenBSD, but not on FreeBSD nor Linux.

If dst/ already exists, the dst/ inode is kept (inode number stays the same) but its contents (inode, child files and directories…) are replaced by dir/. This updates dst/’s MC on OpenBSD and FreeBSD, not on Linux; and updates the destination directory’s parent MC. The source dir/ is then deleted (updating parent MC).

In both cases the directory entry dst/.. now points to the source’s parent directory and needs to be fixed to point to dst/. This operation updates dst/’s MC on OpenBSD and FreeBSD, not on Linux.

Note that for each OS the timestamp updates are the same whether dst/ existed or not.

Linux’s behavior is POSIX-compliant and is the same for File/Dir Rename and Local File/Dir Move.

futimens. Linux and FreeBSD both create a new destination with an updated B and then restore MA with futimens().

MA ealier than B

File moved across volumes by Linux can be identified as they have the unique property to have MA (copied from source) earlier than B (updated). Note that only copy both from and to EXT4 file systems were tested.

There is no difference between a local file copy and a volume file copy.

If the destination did not exist:

If the destination already existed:

The CSV profile for POSIX was built manually from the specification and is available here:

With the strictatime mount option Linux is POSIX-compliant on those MAC tests.

Keep in mind that by default a lot of repeated A updates are skipped due to relatime.

The second table focuses on directory operations: dir listing, what happens to a directory when a new child file is created, when a child directory is deleted, etc. 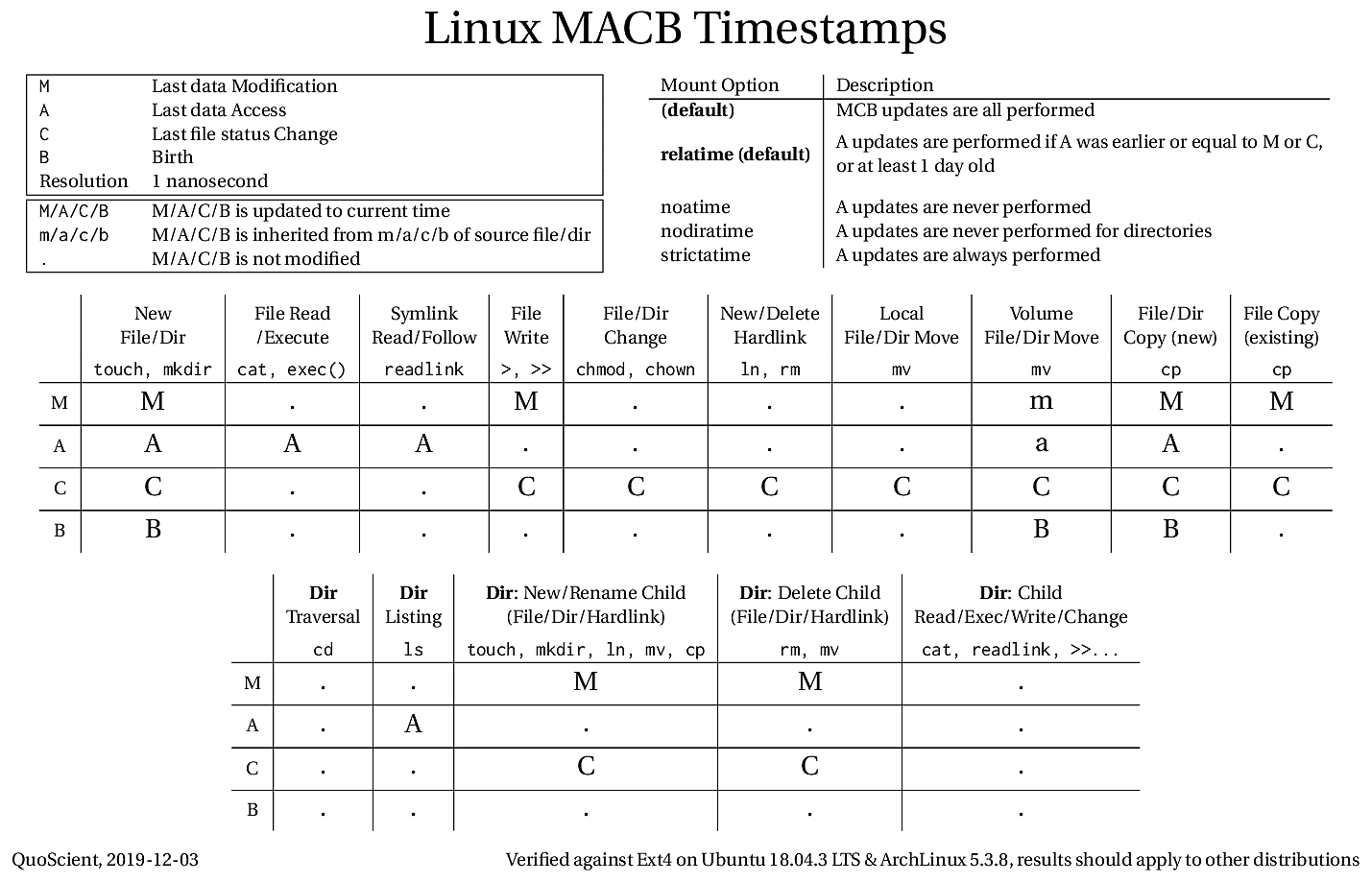 The operation “Dir: Dir Moved into (Local)” describes the MAC changes to a directory that sees another directory being moved there from the same file system, it is due to the Path Check step happening in the “Local Dir Move” operation described previously. 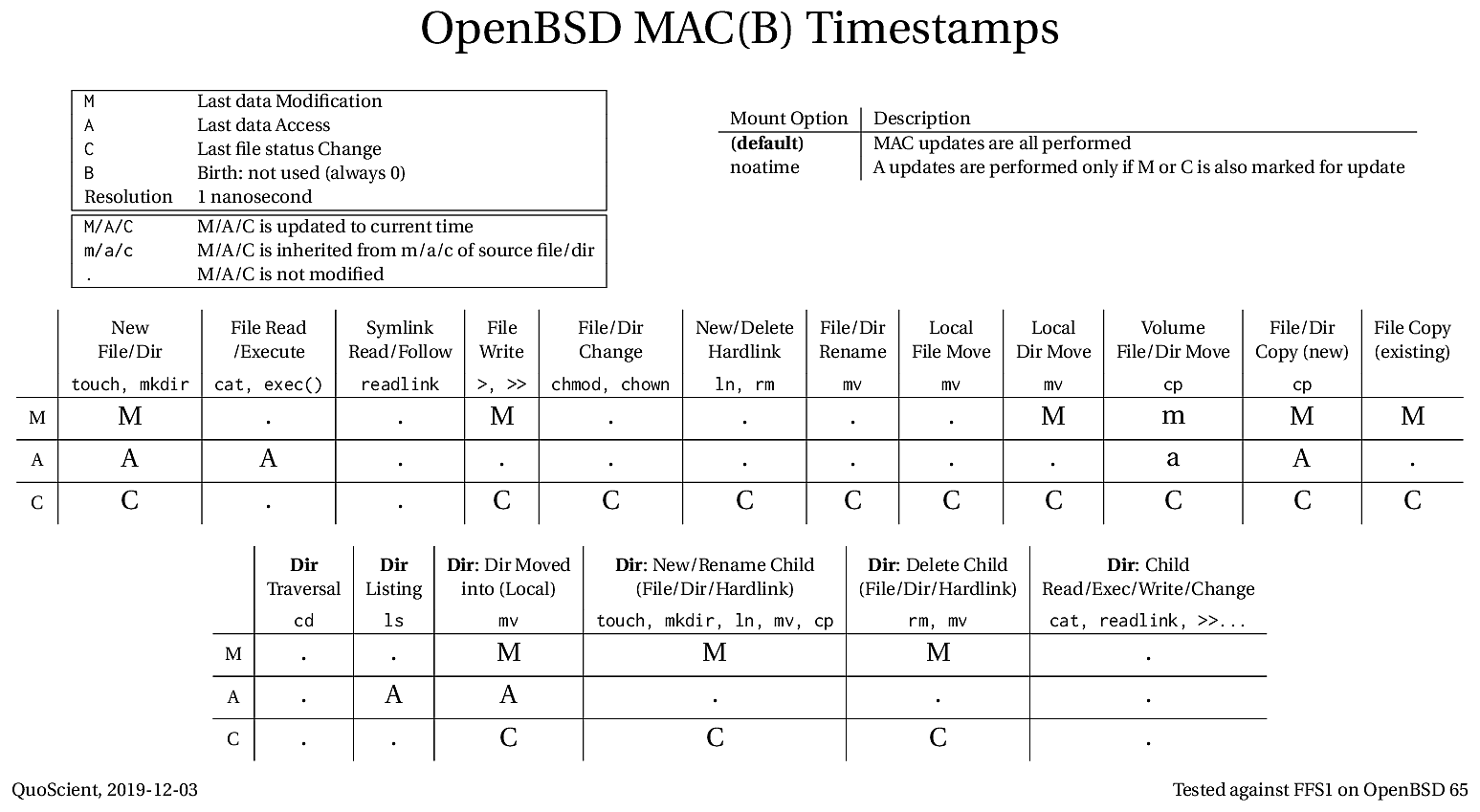 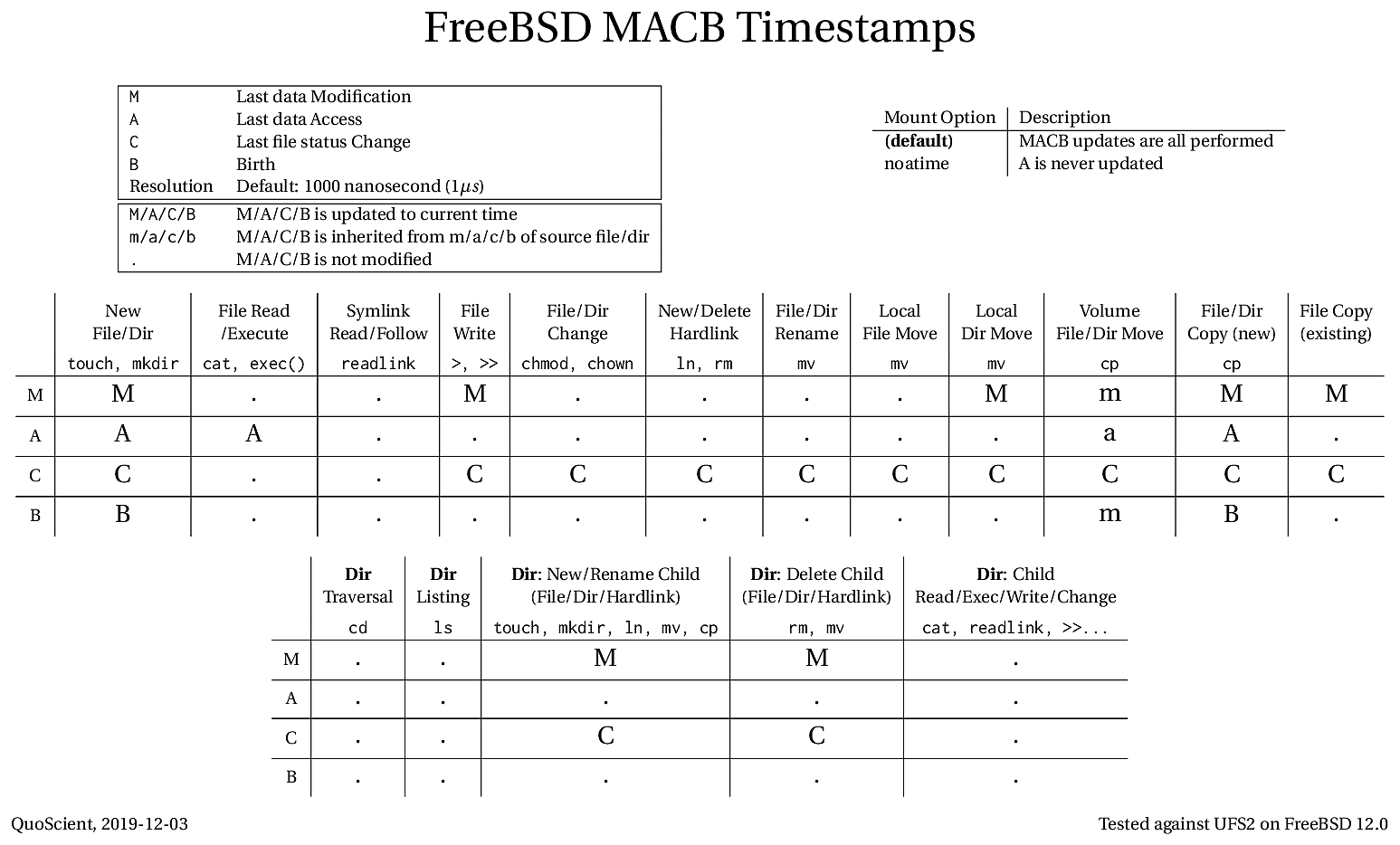 Though POSIX describes at great length when the MAC timestamps shall be updated, there are major implementation differences across Linux, OpenBSD and FreeBSD.

This is no bug as none aim for strict POSIX compliance and some of the differences are clear optimisation efforts to mitigate the extremely frequent A updates each time a file is read.

Forensics analysts working on multiple UNIX-like environments should be aware of those implementation differences, the “MAC(B) Timestamps” tables can be used for reference on each OS.